As an emerging Interior Design professional, I find myself constantly seeking inspiration for design projects. Looking to designers like Barbara Barry helps me to figure out how other designers find inspiration throughout their iconic careers. Barbara Barry’s latest book “Around Beauty” has led me to realize that nature can be a source of eternal inspiration. In Ms. Barry’s book she walks us through her daily life as a designer and how she finds inspiration everywhere she goes.  She states that many times her color palette for a room can be influenced by something as simple as a pistachio. Ms. Barry says, “crack it open and discover the impeccable pairings of lavender and lime, ivory and tusk. Looking closely, you will see a pistachio’s influence in my work: beached oak floors, pale green walls, and hints of lavender in pillows and trims.”

Nature offers us dynamic color combinations, all we must do is go outside and absorb. I am overjoyed as I read Ms. Barry’s passionate words about the colors that inspire her work. Citrine, a color that I recently grew to love especially when paired with a rich emerald purple, is also one of Barbara Barry’s favorite colors.  Ms. Barry says, “Citrine is liquid light, and this jewel of a color pops up throughout my day in the thin smear of olive oil on an all-white plate…”

Barbara Barry’s favorite color in nature is the color of a fig. “There’s something delicious about a fig’s powdery surface conjuring up dark velvets and luscious silks–it’s deep color can be an exclamation mark of dark in a pale room.” It is so intriguing to me to read Ms. Barry’s words and to see how she see’s the world, so pure yet abstract.

I recommend Barbara Barry’s book “Around Beauty” to any designer or non-designer in need of inspiration.  Indeed inspiration is the greatest feeling someone can have and as Ms. Barry reveals, “I feel my most alive on the edge of an idea…my heart beats fast and I feel my most confident.” In closing, go outside and get INSPIRED!

On my most recent trip to San Francisco, I was able to take some time to walk through the Galleria in search of materials for a returning client. I always make a stop at Wroolie and Company who are known for their high end furniture and lighting which range from custom reproductions, original designs, to contemporary. I was delighted to see several cerused oak side tables near the front window of the showroom. I’ve been fond of this finish for years and am very pleased to see that it is being used in new and interesting ways. These pieces by Mario Grimaldi International were in a variety of rich stains and finished with a high gloss finish. 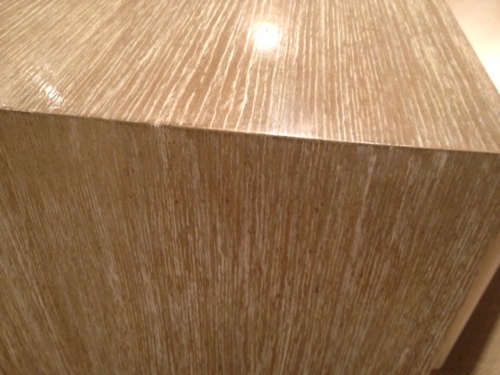 With my interest piqued, I did a bit of research on cerused oak and learned a few interesting facts. The technique of cerused oak, known as limed oak in Britain, began back in the 16th century.  Carpenters rubbed a material containing lime into the grain of the wood to fill it, then the wood was stained and finished giving you a two toned effect. Cerused oak became popular again in the age of Art Deco and is having a  comeback in our decade as well. 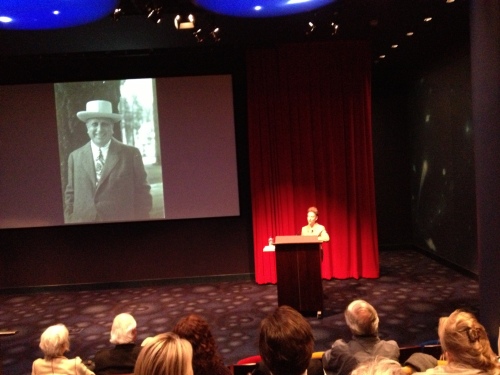 My fascination with everything Julia Morgan has taken me to a series of lectures  presented by the California Institute for Classical Art and Architecture, California north Chapter in San Francisco.  The third in the series was Tuesday evening, ”Hearst the collector” , an illustrated lecture by Mary Levkoff.

It was delightful to drive into the Presidio as the evening was falling and the view of the bay and the city skyline from near the Golden Gate Bridge was breathtaking.  The Disney Family Museum is in the buildings near Crissy field.  Here we met with the author for a reception and book signing in a space with “It’s a Small World” art work on walls and floors. 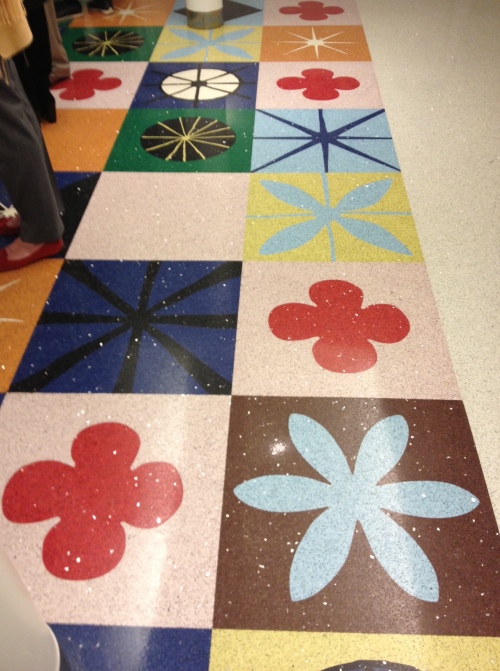 Ms. Levkoff , former curator for the LA County Museum of Art has studied Mr. Hearst’s collections extensively.  She credits him to have been the most outstanding Collector in America of European Sculpture, tapestries, silver and armor.

Janice and Ms. Levkoff at the Book Signing

Mary Levkoff shared with us her process, pouring over old interior photographs, to discover which outstanding pieces of his collection are now dispersed in museums throughout the world.

Perhaps I’ll have a long weekend this summer to enjoy the home of only a small portion of his collection at the Casa Grande, San Simeon, the Hearst Castle, designed by Julia Morgan for him.  For over thirty years she collaborated with him on his castle on the Enchanted Hill. 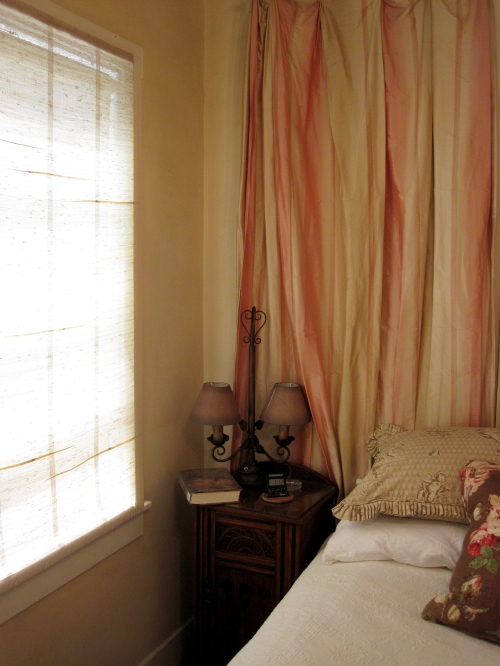 Perhaps it is the light that makes this room my favorite. It filters through the grass woven shades to soften the cocoa and cream textures and brings healing to my soul like a warm frothy latte. My Francophile persuation is played to with the antique over mantle as a headboard, framed on either side by striped ombred silk. Here is where I grab my current read and snug under covers or on top of the forgiving matlesse bedcover. 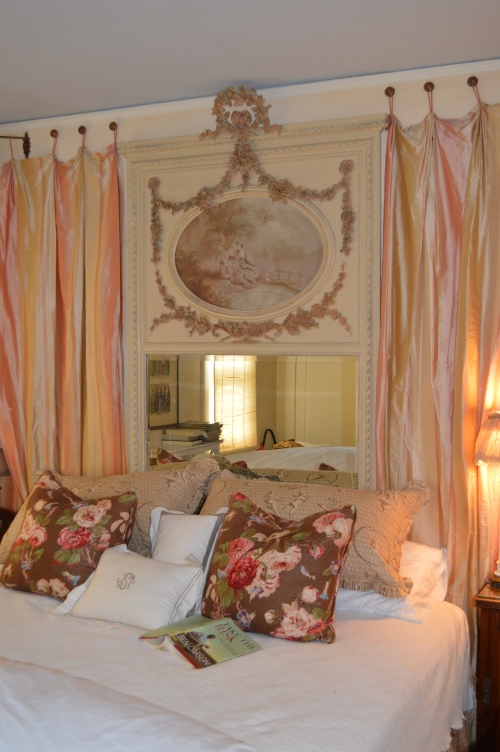 I can indulge myself in the sentimentality of photos of the ones I love surrounded with fresh flowers sharing their happy colors and faces to my “altar of endearment.” 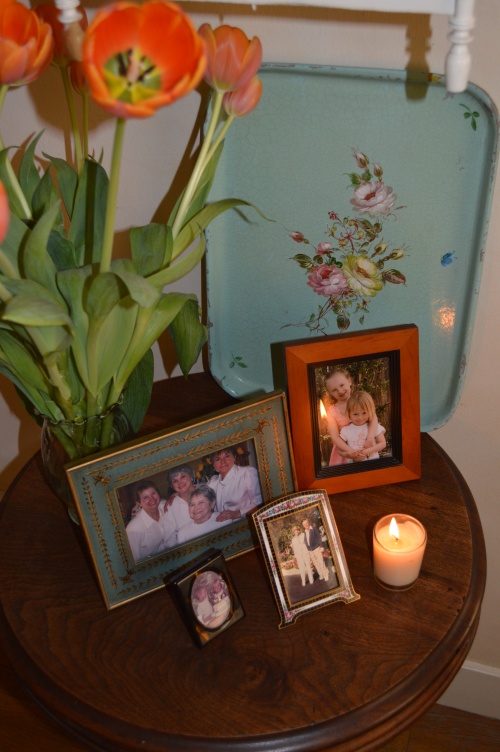 The pale blue ceiling gives my space a magical sky effect, to enhance the quiet solitude and beauty of my very own cocoon-like retreat. Here I can thank God for all He has provided in home and love while enjoying the rhythm of my restful breathing.

The luxury of a crystal chandelier sparkles with reflection and candlelight to add the element of romance. It’s beauty greets me in the morning light as  I awaken in my bed below.

Small cherished artifacts add to the happiness my bedroom brings me. Like the small tatted bookmark cross handmade by a favorite great aunt.

This is where I like to be no matter the altitude of my moods. It is where I can let the rest of the world go by!

Julia Morgan has been an inspirational talent in my design career since I was given the amazing opportunity to work on a project at the one and only Julia Morgan design house in Sacramento in 2000. The gorgeous historic home designed in 1918 breathes nostalgia back into Sacramento, has been owned by Sacramento State University since the 1960’s. Through research I knew the pioneering spirit of Julia Morgan. She was the first female licensed architect in California and she achieved this by receiving a degree from Ecole Nationale Superieure des Beaux-Arts in Paris, where she was the first female admitted as well. I thought it only fitting to pay homage to this remarkable woman by making a pilgrimage through the streets of Paris to see the school she attended and the places she lived.

During Julia’s five years in Paris she inhabited three apartments throughout the 6th androssiment. The first apartment was located at 4 Rue de la Chevereuse. The crisp white of the facade is contrasted by the large black paneled doors of the entry. Today the building is used as a satellite of Columbia University and works to establish partnerships between America and European scholars.  During Julia Morgan’s time the building housed American students pursuing their degrees in Paris. 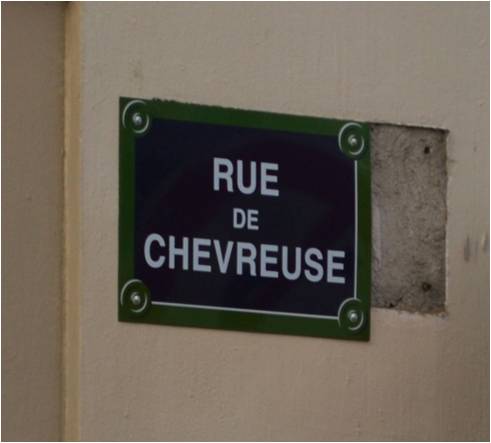 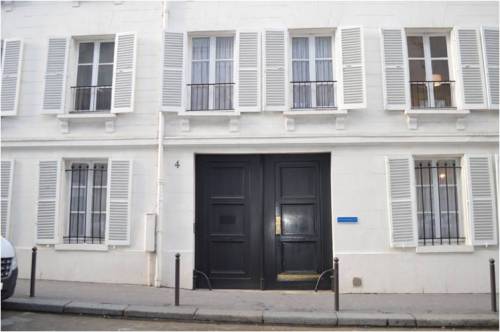 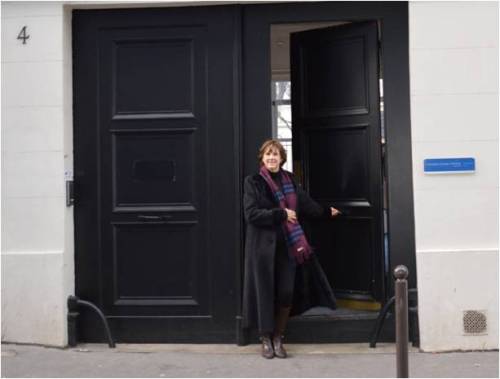 Julia’s second apartment was located at 7 Rue Honore Chevalier. This building which was constructed in 1891 would have been less than a decade old when Julia Morgan lived in it. The rustic brick mixed with iron work exemplifies classic French architecture.

The third apartment Julia lived in was 15 Rue Guenegaud. The high gloss rich emerald green doors are flanked by tiny boutiques on the street level with apartments on the three floors above. This apartment is the closest to the school of the three and is within close proximity to La Siene river. I imagine this was Julia’s most treasured apartment during her stay in Paris.

After leaving Julia’s third apartment I journeyed to Ecole Nationale Superieure des Beaux-Arts where Julia received her degree in Architecture. Just beyond the gates to the school you are greeted by ancient architectural ruins displayed in the courtyard.

The grand courtyard transitions students and guests from the street and into the glass ceiling space of an interior courtyard. 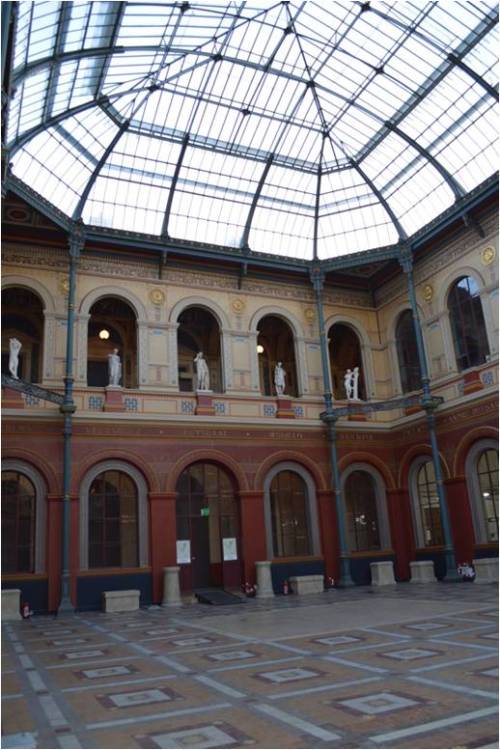 The colors and motifs of this space are inspired by Pompeian architecture. 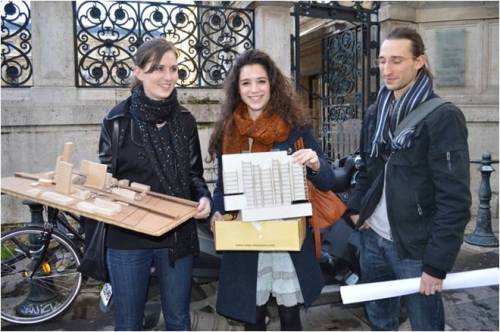 As I was walking up to the front gate of the school I was delighted to see three architecture students, two of which female, with projects in tow. I talked briefly with these students and was truly inspired to see young and eager designers pursuing their passions. 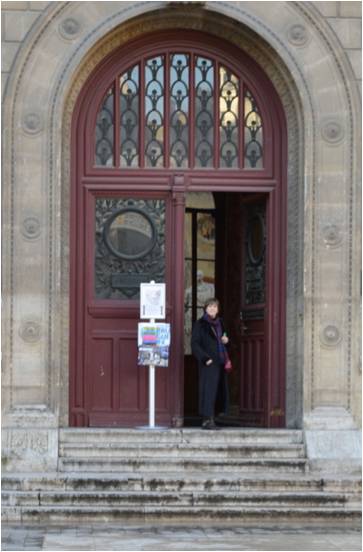 My adventurous spirit was stimulated as I followed in the footsteps of the inspirational talent, Julia Morgan. With Julia Morgan’s legacy of over 700 designed buildings in California and her treasured design located on our T St. here in Sacramento, her designs will be forever remembered as harmoniously classic architecture.

“My buildings will speak for themselves” Julia Morgan